William McDonough has been famed as a ‘hero for the planet’ by Time magazine. The American designer, architect and author is certainly a worthy recipient of the endowment as a globally recognised leader in sustainable development.

The ‘Cradle to Cradle’ author’s mantra is to “create ecological footprints to delight in, not lament”. The Cradle to Cradle (C2C) concept, written with German chemist Michael Braungart, suggests that through design, industry should protect and enrich ecosystems in a way that is efficient and essentially waste-free. McDonough and his company McDonough + Partners have been commissioned to design some of the most well-known landmarks of sustainable design. These include the Ford Rouge truck plant in Michigan, NASA’s Sustainability Base (pictured below) and YouTube’s Headquarters.

McDonough likens his architectural vision to create something like a tree, that when planted provides something good, like oxygen. His designs often have features such as natural ventilation, rainwater harvesting and roof mounted PV panels. 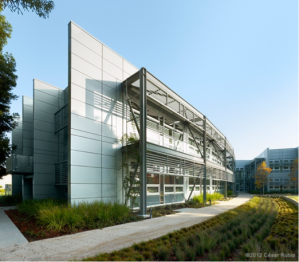 William McDonough has been privy to a life of celebrity and star-studded parties as his reputation has grown in prominence. The architect was guest of honour at the home of Universal Studios president, Ron Meyer in 2005 surrounded by fifty of Hollywood’s most well-known actors and media types. A lifestyle incomprehensible to most designers and architects, McDonough met Meyer through actress Cameron Diaz, whom he met while working on a documentary about renewable energy.

In 2007, McDonough partnered with actor Brad Pitt to establish the ‘Make It Right Foundation’ a project to build sustainable homes in the wake of Hurricane Katrina. The mission of the foundation is “to build safe, Cradle to Cradle inspired homes, buildings and communities for people in need”.

It might seem like the man who spawned the “third industrial revolution” has it all. You never would have thought by the age of 18, William would have attended 19 different schools. And that his infamous speeches, which are preached in numerous universities and conferences all over the world, are the result of studying ‘The Art of Memory’, a book about Roman oratory.

It seems that every dog has its day, William ‘Bill’ McDonough was once called a ‘Master of Design’ by Fast Company magazine, only to be the subject of an article entitled ‘Green Gurus Gone Wrong’ several years later. However, McDonough’s revolutionary ideas of a sustainable utopia provide ground breaking ideas for sustainable design and his charismatic approach brought socially responsible development into the consciousness of wider society.