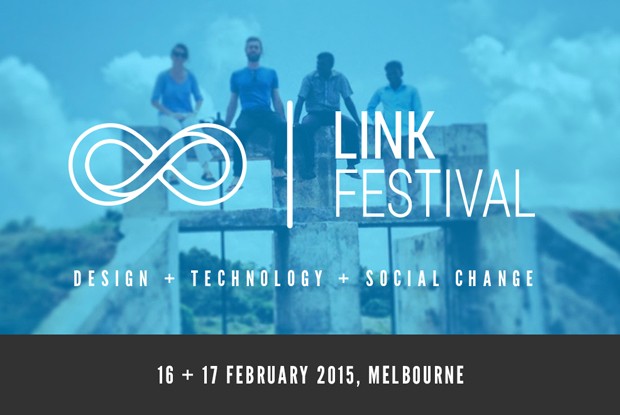 Link Festival congregates people who have a passion for using design and technology to create positive social change. The focus this year was as much on global problems as it was on local problems.

Topics covered included convergent technologies, the internet of things, big data, smart cities, food sovereignty and sanitation. The passionate speakers took us on journeys through the slums of war torn countries, the fast paced cities of the future, the depths of cyberspace, outer space and the bottom of the ocean.

Overall an inspiring, upbeat and optimistic outlook on our immediate future.

The festival started with a word from FutureCrunch, a futurist’s consultancy who advise companies and universities on global trends in technology and science. Founders Tane Hunter and Dr Angus Hervey were full of energy as they ‘geeked out’ on stage telling the crowd about all the wonderful things in science and technology we have to look forward to  in the next decade. They also drew from the recent annual report by the Bill and Melinda gates foundation, highlighting encouraging stats on war, poverty, disease and literacy; then contrasting it to the top 10 news stories on CNN (spoiler, it was mostly bad news). The boys left the crowd brimming with optimism, the perfect mindset for a festival such as Link.

What an opening! @future_crunch urging a positive perspective on the world – because there are exciting things ahead pic.twitter.com/pl8WCfBqSI

The internet of things (IoT) will accelerate our thirst for collaboration and data. It will allow us to know more. Not just about our own movements and behaviours, but the movements and behaviours of us as a whole city, country and species.  A key point to take from this talk was not to get caught stargazing at the possible fountain of knowledge about to be unlocked, but the dangers in knowing so much so quickly. Even the most progressive of governments will fail to keep up with the speed at which private entities, and even individuals, will obtain data and use it to their own commercial or personal advantage.

One of the winners of the Australian Google Impact Challenge, the biodigester by Engineers Without Borders, addresses a serious sanitation problem in Cambodia. A problem that cripples the economy and prevents millions of Cambodians from living a full and healthy life. From an ethical perspective, this is clearly a positive breakthrough, as Cambodians suffer from water borne diseases, especially during the flood season. From a productivity perspective, the biodigester will free a huge number of people from a problem that would otherwise prevent them from receiving an education and contributing to the growth of their country. These are the hidden knock-on effects that won’t be realised for another decade, but they are the most exciting.

SOLVING THE FUTURE OF STUFF

Solving the Future of Stuff was my favourite talk; it focused on themes like life cycle analysis and the rise of experience over product. The panel included:

Anna Minns, founder of Terracycle, a for-profit company who recycle materials that no-one else wants to touch. Being a ‘for-profit’ organisation, they are forced to find value in the waste they collect and innovative ways to get that waste to their facilities.

James Moody, founder of Tushare and Sendle. After Tushare was launched you would be forgiven to think that James Moody was “just” a man with a good idea, after Sendle was launched, you put two and two together and realised Moody’s  vision; give away your clutter with Tushare and use Sendle to send it on its way. Moody believes, along with a host of others including the CSIRO, that consumers will seek higher end experiences due to income growth and over supply of mass consumables.

Grace Turtle, founder of Makers Place, a collaborative space for young tinkerers who have an interest in new technologies and solving social problems. It’s a relaxed environment to play with new technologies with the primary aim to create awareness of social and environmental problems from grass roots levels. For a monthly fee you get access to tools, 3D printers and workshops.

By 2030 Gen Y will make up 70 percent of the workforce and 60 percent of them aspire to change the world with their job. Thanks to companies like these, I feel we will see radical change on the topics covered at Link Fest within one generation.