Personal vs. Mass Production – The Impact of 3D Printing

In 2013, 3D printing experienced a sharp increase in public interest.A barrage of click bait articles created a one-sided discussion, focused on what could be made for us in the comfort of our own homes. Learning from the past we now know to ask “what effect is this advance going to have on the environment?” Historically (with few exceptions) this question has been asked only after the damage is done and long after it can be repaired.

Personal 3D printing vs mass production – is the move to 3D printing a good one for the environment?

I don’t pretend to know the answer but I’d like to present some of the environmental strengths and weaknesses between personal production and mass production.

If we consider that in manufacturing time is money, mass production is chillingly efficient. Industrial scale machines (injection moulding for example) can produce hundreds of units in the time it takes a desktop printer to complete a single item. But what about the resources used to fuel that production? A desktop 3D printer has energy requirements similar to a small espresso machine; mass production machines typically use gallons of water and draw an enormous amount of electricity.

But once we scratch the surface of the full product life-cycle and consider hidden factors, both have different costs in transport, storage, packaging and perhaps most importantly, different philosophies driving them.

Transport costs for 3D printing are low due to space efficient raw material. Transport costs for mass production are extravagant; despite designer’s best efforts, space efficiency of a completed and packaged product will never equal the efficiency of raw material. (This is not to gloss over the intrinsic environmental cost of packaging, which must be produced and shipped as well.) Storage may not seem like a factor worth mentioning, but consider the cost of maintaining the correct temperature and humidity levels in large warehouses. From storage, the path for mass-produced products ends in two ways; either it is transported again and shelved for sale or it is summarily land-filled to make room for more marketable stock. This brings us to marketing as a cost in itself. Mass production requires mass demand, where it is found lacking demand is manufactured with clever marketing. This results in people buying things they don’t need and didn’t realise they wanted.

So much of what we buy already has its successor in the pipeline, When you bought your Smartphone 5, the Smartphone 6 was already well into development.
Less than scrupulous companies will build in planned obsolescence – that is, parts built to fail quickly and irreparably with the intention that it will soon be replaced with a new model.
And while this is an article discussing environmental implications, I feel the need to point out that the average end user has no access to manufacturer information. Questions such as; who assembles this product? How much are they paid? How old are they? Are they safe?

3D printers for prototyping at CobaltNiche

Personal production and has the potential to prolong the life of existing products. A 3D printer doesn’t have to be a personal trinket factory; it’s up to the individual. It can be the means to replace damaged or missing parts; it has the potential to put innovation into the hands of everyone, it is the antithesis of a marketing driven system.

The Industrial Revolution of the last few centuries led to affordable goods for everyone, but it came at the cost of flooding the market with pointless production. The great hope behind 3D printing is that it is part of a wider change in consumer behaviour, perhaps I’m optimistic but we can only hope.

The power is yours!

Chris is a Product Design Engineer at CobaltNiche and our resident 3D printing expert. You can read another of his posts here.

Edit 21/7/15: here’s the author with his latest 3D printed masterpiece, a miniature model of himself. It may not be a perfect example of the widespread changes 3D printing will bring to manufacturing, but it shows just how accurate the technology is. Mini-Chris even has buttons on his coat! 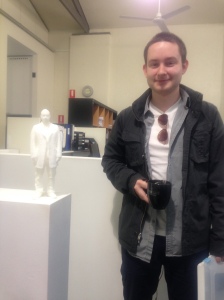 ← Dawn of the Solar Age?
Social Design is Slower Than You Think →