A very creative new way to clean up oil spills has been invented here in Melbourne, Australia by scientists at Deakin University. The technology has been in development for several years and is now ready for trials by industry, according to Professor Ian Chen and the research team.

The material acts like a sponge to separate oil from water. It existed first in a powder form that seemed promising but was lacking enough practicality to clear up a spill quickly and effectively.

“In 2013 we developed the first stage of the material, but it was simply a powder. This powder had absorption capabilities, but you cannot simply throw powder onto oil – you need to be able to bind that powder into a sponge so that we can soak the oil up, and also separate it from water,” said Professor Chen.

The real genius behind the invention is taking the powder and forming sheets from it. Now that they’ve figured it out, the finished product is called a boron nitride nanosheet, which is made up of flakes which are just several nanometers (one billionth of a meter) in thickness. The sheets are filled with tiny holes and are so porous that “a single gram has the size of 5.5 tennis courts,” and can hold oil and solvent up to 33 times its own weight, according to Dr Weiwei Lei who authored a paper on the development. 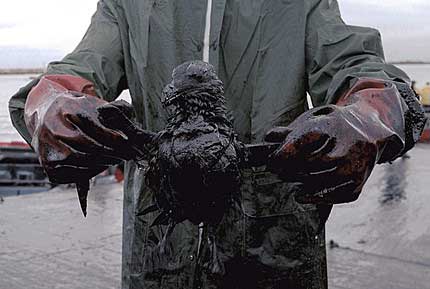 Clean-up workers attempting to rescue one of the victims of an oil-spill.

Oil slicks are a real problem in Australia and internationally, and it’s heartening to know that a product has been developed to lessen the devastating environmental impacts of a spill. The 2010 Gulf Coast incident is proof of just how much difficulty we currently have trying to cleaning up these toxic messes.

The nanosheets will also be capable of clearing spills on freeways, not just ocean. Where an accident involving a tanker might today close 10 lanes of traffic for a whole day and cause large economic losses, the future of the invention suggests that damage will be contained far more easily.

The research team included scientists from Drexel University, Philadelphia, and Missouri University of Science and Technology, and was supported by the Australian Research Council.

← Have We Reached Peak Minimalism?
The magic mushroom. →